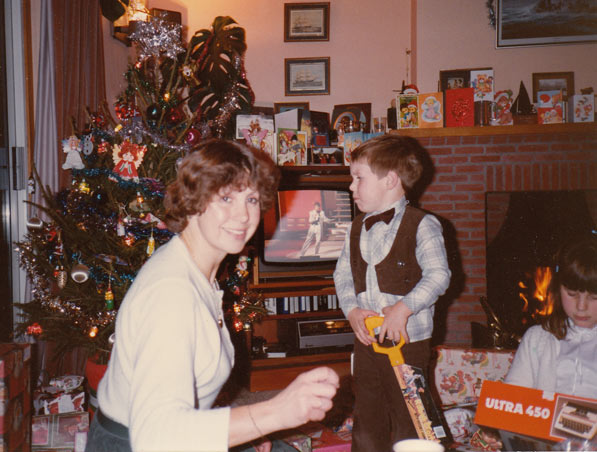 It was the mid-80s: Cliff Richard was on telly, our video player was the size of a small family car, my mum had a perm. My dad’s fondness for pictures of ships managed to make itself felt through a forest of Christmas cards – which is still the case today. I, however, wasn’t fussed by any of this, for I had received my dream present. I had received a typewriter.

I think my desire for a typewriter had partly come about thanks to the advert for the Petite 990, clearly a massive rip-off of 1980 film 9 to 5. Not being aware of Dolly Parton’s acting career, it was to me three girls who were taking no shit from anyone, and someone was typing. It didn’t occur to me that it was, in effect, lining up little girls for a lifetime of being someone else’s PA.((I did my fare share of sec/rec/switchboard as a student.))

“What will you write on it?” my parents wanted to know.

“I need it so I can write stories.”

It was at about this age that I realised the games I played with my toys were basically stories, the only difference being that my stories weren’t written down. I clearly had no idea of plot points, of the inciting incident, of the midpoint, of the crisis, climax and resolution. But at least I had come to the conclusion that the imagination was quite important.

I had that clichéd idea in my head, like a lot of people do, that writers spend all day bashing away at a typewriter, only pausing to gaze whimsically from the window onto a nice view. I would have a Petite 990, and I would write my stories on it.

I was thrilled when my typewriter appeared from its wrapping paper; momentarily disappointed when I realised it wasn’t a Petite 990 but an Ultra 450 – whatever one of those was. But it was still a typewriter.

During what remained of the Christmas school holiday, I nagged my mum until she set up my typewriter, and I got to work. I wound a blank sheet of paper into the machine, and started to type. Knowing that my brother, Simon, was too young to read, I tested my typewriter by writing about him.

SIMON IS A WOLLY.

SIMON IS A STUPID WOOLEY.

I sought my mum’s help. She ignored all three of my questions and went straight to, “Your typewriter is now confiscated because you’re writing nasty things about your brother on it.”

I had a passionate meltdown of young Jane Eyre proportions. But it didn’t matter that I pointed out how often Simon had repeatedly pinched me with the “robot hand-grabber” so thoughtfully gifted him by my grandparents,((You can see him holding it in the photo at the top. You can see him thinking of ways to inflict pain with it.)) and that calling him a “stupid wooley” was really quite nice after the suffering he had caused me – no, I was a very bad girl indeed.

And so I didn’t bother with the typewriter again. It’s perhaps just as well that I had been bought the knock-off Ultra 450, when the Petite 990 was the best part of £30 – a phenomenal sum in the mid-80s. But I did learn something that was very important: you don’t need a typewriter to write stories. Pen and paper are perfectly adequate, and the best place to write is inside your head. As for the nice view? Well, this morning as I bashed away at my laptop, I paused to look up and saw a mangy urban fox have a tinkle against my garden bench. Not quite a vista of distant, snow-capped mountains, picturesque city roofscape, or a placid river valley, but it’ll do.