I need very little excuse to go to Edinburgh. I love it. I love it because it’s got loads of old stuff, it reminds me a bit of Granada (the old town with a castle on the hill, the new bits cascading away beside), and it is stuffed full of history, much of it involving coffins. And it’s quite a cheerful place, too.

I met up with Sarah Ward, who I’ve met before as she’s convener for the Midlands Chapter of the CWA, and is also great fun. I met for the first time the extremely affable Vanessa Robertson, an Edinburgh-based bookseller and author; and authors Leigh Russell, Kate Ellis and Paul Gitsham. And lots of other people too!

The weekend began with a prosecco reception, hosted by well-known Edinburgians, Ian Rankin and Alexander McCall Smith. They talked about Edinburgh as the Jekyll and Hyde city, and as Ian Rankin talked about graverobbers, and Burke and Hare, and the 1832 Anatomy Act,((I was so impressed that he mentioned the Anatomy Act. It makes an appearance in both Poison Panic and Fatal Evidence!)) behind his head, through the window, we could see tourists wandering about Old Calton cemetery, as if they were looking for fresh corpses to hoik to the Medical School. This is one of the reasons why I love Edinburgh – it has so much history, and it’s always there, never far from the surface.

Now, I must admit that I don’t go out very much. In fact, I probably go out on the razz about twice a year. So when there’s free prosecco, and splendid wine, and I’m happy and feeling comfortable among people who are quite a lot like me, then… well, let’s just say that wine happened.

I remember talking to Ian Rankin (poor man) about his appearance on Scot Squad, and for reasons I’m still not sure about, my appearance on Punt PI (“I was in a cupboard with Steve Punt. Well, almost.”). And there was a waiter called Sebastian who kept bringing round plates of canapes, and I went all Felicity Kendall on him and said he was very charming, but I didn’t really want any canapes, although the amuse-bouche haggis was fantastic. And I remember talking to Jason Monaghan who works at an historic fort, and I was sprayed with a quantity of perfume called Damn Rebel Bitches, named after the women of the Jacobite uprisings. I remember walking to a roundabout where Conan Doyle’s house used to be. Not on the roundabout, you understand… but….

Nearby is a pub called The Conan Doyle – Sarah, at this point, sensibly went back to the hotel. I, however, was having a high-old time, and the evening went on. Vanessa and I scared an Australian with our discussion on bullet wounds, and then we went back to Vanessa’s lovely artisan cottage by the Water of Leith for pizza. I met her adorable son and her adorable (and gigantic) dog, and her husband met me and probably wishes he hadn’t! And then it was eleven o’clock, and I was in a taxi.

And for some reason, I made a little film of Princes Street, driving along to Waterloo Place, with a very quick view of North Bridge. And me, not sounding drunk in the least, saying to the driver, “That’s very, very marvellous! Thank you very- ever so much.” As if I was going to roll through the door and discover that Jeeves had put my jimjams out, waiting for me.

I was all nice and snug in my cosy little room under the eaves. But then something rather awful happened. You know that bit in a police procedural where the detective goes maverick, and somewhere along the way, they probably drink a bit too much and fall over? Well, yes, something along those lines happened, but to a librarian who doesn’t go out very often.

A veil shall be drawn across the next few hours….

There were two talks on the Saturday morning, but because wine had happened, I didn’t quite feel able to leave my room. I’m really rather sad that I missed them. Note to self for any further conferences: for god’s sake, beware wine happening.

Augustus Spratt decided to shop for a new waistcoat, so I did a record-breaking speed walk (despite my poor head) from Waterloo Place, over North Bridge, up the Royal Mile, and then down to Victoria Street by the Grassmarket, to my favourite tweed emporium, Walker Slater. Walking through Edinburgh amongst the milling tourists is not an easy task, but several years of living at the other end of the country on the Isle of Wight, where ambling tourists present the same slalom challenges, means that I darted through the streets like lightning. No waistcoats for Augustus, alas, although, reader, I bought… a tweed tailcoat. It is the most glorious thing, and Augustus is extremely happy, as am I.

There was an outing that afternoon to The Writers’ Museum. I hadn’t been before, so it was lovely to go into one of Edinburgh’s oldest houses, and to see the displays. We had a very informative afternoon with one of the guides showing us their exhibits of Rabbie Burns, Sir Walter Scott, and Robert Louis Stevenson. They even had Scott’s baffies.((That’s slippers in yer actual Scots.)) And Burns’ sword-stick, which he used when patrolling for smugglers, which was very exciting indeed.

And the famous wardrobe from Stevenson’s childhood bedroom, rumoured to have been made by Deacon Brodie, legendary Edinburgh baddie. Both doors have a central panel of wood, and the rings swirl in such a way as to look like two faces. I pointed this out, and the guide said this has been commented on by other people – was Stevenson staring at those two panels and the man of two halves, Jekyll and Hyde, came into his mind?((After, one assumes he had read Hogg’s Confessions of a Justified Sinner!))

The gala dinner was very pleasant, although I wish I hadn’t been feeling quite as delicate as I did. However, Leigh, Paul and Kate were excellent company.

The next morning, I had recovered enough to attend the last two talks, and I’m very glad I did. The first was by James Grieve, Emeritus Professor of Forensic Pathology at the University of Aberdeen. Despite having written the biography of a forensic scientist, I’ve never actually (knowingly) been in the same room as one before. So this was rather exciting. Professor Grieve’s talk was excellent – very funny, but tinged with seriousness when required; he views his role as “the physician to the bereaved.” Anne Cleeves even bases her forensic pathologists on him in her fiction.

What struck me, though, was that, to me, there was something eerily familiar about the professor. And as he spoke, I realised what it was. He is not far off how I imagine Professor Taylor to have been.

“I am a lecturer at the university and in the courtroom,” he said. “Even if it annoys judges.” Taylor said more or less the same thing. Professor Grieve had even been conned into an interview by a writer – as had been Taylor. He was sarcastic and witty, like Taylor, and to be honest, the only two reasons that I’m able to tell Grieve and Taylor apart are that Grieve lives in the 21st century, and does not have Taylor’s “imposing height”. After he spoke, I was keen to tell Grieve that he reminds me of Taylor, and he actually seemed flattered! (or scared, I’m not always able to tell….)

The next talk was about The World’s End murders, by Tom Wood, former Deputy Chief Constable and Director of Operations at Lothian and Borders Police. It was an enthralling hour’s talk about a 34-year murder enquiry, which was finally tied up when DNA from a long-dead man was found behind some polystyrene coving. The dedication of the many people who brought the killer to justice was extraordinarily humbling.

Crime writers often describe their detective characters as “determined”, but until you’ve actually sat only a couple of metres from a truly determined police officer, who will grind on for years to get justice for the sake of the girls who were killed, and their family, and the community and the city that they lived in – you don’t understand quite what determination means.

In the afternoon, I went to the Author Speed-Dating Event at Blackwell’s on South Bridge. I bought six books, spoke to several authors who I’d not already chatted with that weekend, and listened to the crime flash-fiction by creative writing students, some of whom had been facilitators for the weekend. And then I had an ice-cream at the Grassmarket, near Greyfriars, where they used to hang people. How lovely. 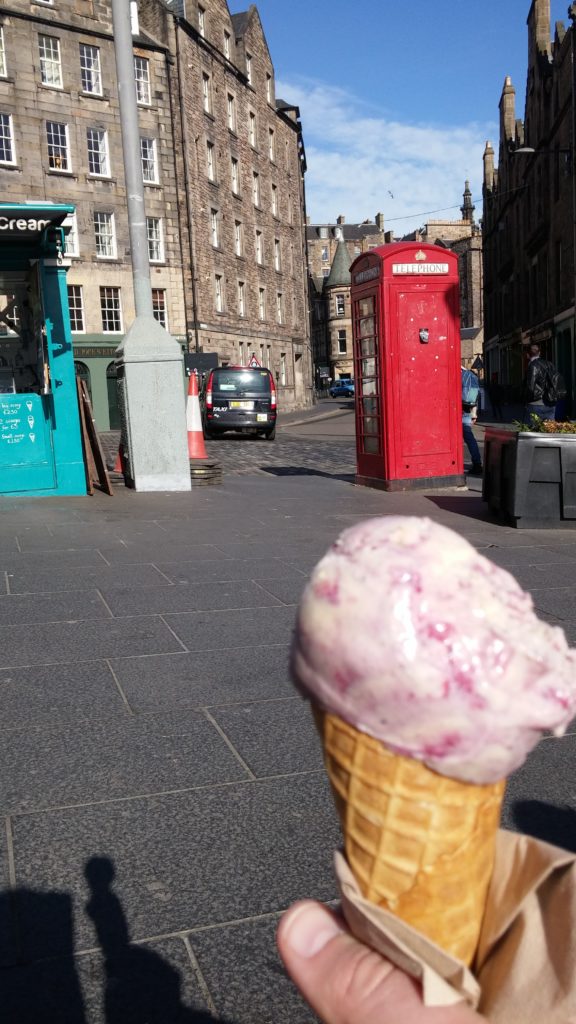 I went wandering off, back across the bridges, to New Town.

Alas, I had not only the six books that I bought from Blackwell’s, but the books that were in the goody bag as well. It was quite a mission to pack on Monday morning, and I managed to leave my charger in the room! Whoops!

On my last day, I finally got round to looking about Old Calton cemetery, which was nearly opposite the hotel. When I last came to Edinburgh, I managed to do all of Edinburgh’s old burial grounds, except Old Calton, which was closed for renovations. But now I was able to go in, and I wandered about the old stones, reading the names, wondering about the lives (and the deaths) of those people buried there. Wondering too about the criminals who had been hung there and buried in unmarked plots.

The Old Town dragged me back, though, and I ended up sitting in Canongate kirkyard, the blossom drifting like pink snow in the Spring light. It was perfect: death and renewal, side by side, in the city of Jekyll and Hyde.