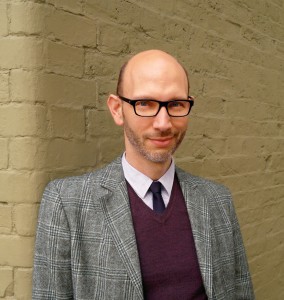 The annual Birmingham Literature Festival is run by Writing West Midlands, offering a programme of events about the written word – talks with writers, and workshops. This year, I attended something a bit different – a talk by screen-curator, Walter Iuzzolino, the real person behind Channel 4’s Walter Presents.

First of all, yes, Walter is a real person. Perhaps I am so jaded by the fakery of modern life that I thought, cynically, that he didn’t actually exist, and was just a marketing construct to put a human face and personality on Channel 4’s world drama picks. There he is in the trailer, a bespectacled, whippet-like figure, watching lots of DVDs – he’s watched 1,000s of hours of telly, to pick only the best for Walter Presents. But how can he watch all that telly and retain a physique like that? And yet, it slowly dawned on me that Walter is a real person – so when I found out he was talking at the BLF, I wanted to know more.

Walter is an Italian, and in Italy, foreign TV is a normal part of TV-viewing life. It’s dubbed, though, which he said makes things a bit rubbish, when the same actress is voicing Miss Marple and Jennifer Anniston. But it means that over a week, you’ll see French, German, American, and British TV shows. Walter talked about the culture and texture of programmes from different countries, and that when he moved to Britain, and saw only US and British drama on TV, it felt as if everything was narrowed down. He wanted British audiences to be able to have the same experience that he had had – and not for it to be framed by having to go to an art house cinema, which puts many ordinary viewers off, who find the atmosphere pretentious.

Walter and some friends risked everything. They left their jobs in TV and spent two years living on their savings as they watched 1,000s of hours of TV from across the world. They then approached lots of different broadcasters, presenting it as a channel of world drama. It was picked up almost immediately by Channel 4 – who have a history of showing subtitled films – and it was their idea to create the brand Walter Presents. All the other big streaming channels – Amazon, Netflix, etc – were supermarkets, but Walter Presents is a deli. Walter records a trailer for each programme; the Channel 4 commissioner’s idea that he pitches each series to the public, just as he had pitched to them originally. And so there you go – Walter is real.

Walter talked about his background, having studied literature at university, and how he has long had a love of story-telling. I’m not sure if this angle was particularly emphasised due to it being a literary festival event, but it raises some interesting points. He’s a big fan of 19th century fiction, the authors whose work originally appeared in serialised form – such as Charles Dickens, George Eliot, Wilkie Collins. And he talked about how Henry James, as a boy, used to sneak under a table and listen to serialised fiction being read aloud. He was only discovered after uttering an “Ooohhh!” at the end of a cliffhanger episode. And so, are box sets the new 19th-century serialised novels?

How do they choose the programmes? They have to have that slick Netflix look, and they have to be between six to twelve episodes long – not the humongous 80-episode series that you sometimes find on foreign screens. If you pick any of the programmes on Walter Presents at random, then you’ll notice they all have that same sheen, which comes from US series created by HBO and the like. HBO were probably the leaders in this – I still remember the first time I watched The Sopranos, amazed that it was a TV series and not a film. But the programmes all have a unique feel which comes out of the culture of the country they’re made in. Take French thriller The Hunter, for example. Apart from the Haussmann streets of Paris looking gorgeous in the background (tempting you to fling yourself onto a Eurostar – but as soon as you’ve got to the end of the episode), it’s uniquely French. The swagger, the leather jackets made from soft leather, the somewhat incestuous undertones in the relationship between the protagonist and his over-bearing mother. This borrowing and translation has happened before, of course – there’s nothing more French than nouvelle vague films, and yet they were heavily influenced by US film. Walter said that watching one of the world drama box sets is like having a mini-break. Here you are, abroad in someone else’s house – and look at their kitchen!

My favourite programmes on Walter Presents have been Deutschland ’83 (a German spy thriller), and – something rather different – Dicte (a Danish crime drama). Deutschland ’83 was so sprawling and creepy, and felt so authentically 1980s – that point just as the concrete in the Berlin Wall began to crumble – and Dicte features a loveable, frustrating journalist who keeps finding herself solving crime. What links both, perhaps, is the realistic characterisation – they’re so believable that even when the characters end up in ridiculous situations, it doesn’t seem farcical. You’re there in the action with them, emotionally involved. Czech crime drama The Lens was fascinating – I’ve never seen anything in Czech before, so it was interesting just as a cultural experience, but it was also intriguing how they tied in the idea of seeing into the way it was filmed. It was an intelligent, artistic way of producing a crime drama and trying to do something with a genre that can sometimes be a bit clichéd.

Of the programmes which I am yet to get round to seeing on Walter Presents, there’s Eyewitness, an award-winning Norwegian crime-thriller, centred around the awkward fumble of two boys, which goes horribly wrong when they accidentally witness four men being murdered. Compounding problems is the fact that one of the boys is a foster child, and his foster mother is the local police chief, determined to solve the murders, no matter what. High stakes drama at its most nail-biting.

Then there’s Spanish drama Locked Up. I’d avoided this as I thought “Is this just a slick version of Prisoner Cell Block H?” I used to be able to get Spanish channel TVE on my satellite – weirdly, I can’t remember if it was subtitled or not (I was learning Spanish at the time!), but I used to watch lots of Spanish dramas, which all seemed to be about the Civil War (they were interesting in and of themselves, but possibly not what Walter Presents is looking for). But from what I could gather from the trailer, Locked Up is a contemporary story, taking cues from Scandi Noir (at least, I always think of Scandi Noir as soon as something dodgy’s going on in a forest, while the light goes an icy blue) as well as US thrillers. Returning to 19th century fiction, Walter compared Locked Up to Wilkie Collins’ The Woman in White. It’s gripping, it’s melodramatic and somewhat ridiculous. This is like a dog-whistle for me: my ears pricked up at once, and I knew I had to watch it.

Many of the Walter Presents dramas have a crime element to them. Swedish family drama Thicker Than Water probably confused a lot of people who were expecting a murder mystery, only to find out that the murderer and his victim were obvious almost from the start – however, that set up the tensions which carried the viewer through the series, about three adult siblings who’d grown up in a dysfunctional home. Bear in mind how much influence real-life crime had on writers like Dickens and Collins. Dickens was fascinated by police detectives and included them in his fiction, and Collins is credited with inventing British crime fiction with The Moonstone, shaping it around the ‘locked house’ mystery, the murder at Road Hill House.((The Beeb are about to unleash an adaptation of The Moonstone, because it clearly hasn’t been adapted often enough already. Why the heck won’t anyone adapt Collins’ Armadale for screen? It even has a main character who’s mixed race! A scheming baddy woman. A shipwreck. Modern audiences would love it.)) Collins even had copies of Alfred Swaine Taylor‘s On Poisons in his personal library: he was adding realistic elements of forensic science to his novels as early as the 1850s and 1860s.

It’s been said by literary critic John Sutherland that The Woman in White is based on the 1856 trial of William Palmer, The Rugeley Poisoner – Sutherland said that Collins had probably gone with Dickens to watch the sensational trial at the Old Bailey, and then constructed The Woman in White on the idea of a case based on circumstantial evidence.((See Sutherland, John, Victorian Fiction: Writers, Publishers, Readers. Basingstoke: Palgrave Macmillan, 2006, p28-54.)) Other evidence suggests that Collins actually reported on the case, heading to Palmer’s home town to write one of the more lurid newspaper articles. Bearing in mind that Ann Palmer (Palmer’s wife, and one of his rumoured victims) wore ‘a thin, white dress’ not long before her death, and bearing in mind that Ann Catherick in The Woman in White is obsessed with wearing a white dress (she being ‘the woman’ of the title), you have another piece of circumstantial evidence to suggest that Wilkie Collins was drawing on real-life crime for his work.

The readers were enthralled. They were panting for each installment as Collins desperately scribbled out each episode. What was the secret at the heart of The Woman in White? Dickens was well-known for his cliff-hangers, too, and there’s a story about Dickens standing in the queue to buy paper to write his installment on, behind a woman who was asking the shop assistant if the installment had been published yet.

Walter discussed how cliffhangers keep viewers hooked – and it’s how we’ve ended up binge-watching through entire weekends. This is the big advantage of streaming, and of being able to buy a series to watch online with the click of a button and watch it immediately. He took me back when he mentioned HMV being full of VHS box sets – gosh, weren’t they huge! Serialised fiction would be published as novels and devoured quickly – just as we now quickly devour boxsets in a week, not waiting for installments over months. The cliffhangers keep us going.

I do think though that writers (and I mean, of everything – fiction, non-fiction, screenwriters), have to be careful with cliffhangers. If you build up an amazing, nail-biting cliffhanger, only to have the next episode or chapter begin with a really boring explanation for the cliffhanger, viewers and readers will soon feel cheated – they’ve invested emotionally in an ending only to be deflated. That cliffhanger has to pay off. Ending an episode with: “Where is she? WHERE IS SHE OMG WHERE IS SHE ARRRGH!!” only to start a new episode with “Oh, you’re over there. Right then….” might work a couple of times as an ironic nudge between writer and viewer/reader, but eventually it just gets annoying. At least, to me.

During the questions and answers at the end, it was clear that many people are just grateful that Walter Presents exists. It unquestionably fulfills a need. So Channel 4 must’ve done something right when they commissioned Walter and his chums – and Walter and his chums had seen a gap in the British market and realised there was an audience for exactly the sort of programmes they wanted to introduce us to.

I asked Walter how he can watch so much telly, and yet not look like I would if I watched the same amount. The answer is simple: he goes running several times a week. And he also has to use lots of eyedrops, and do eye-exercises. He is, after all, not a marketing construct, but a real human being. And hurrah for that.