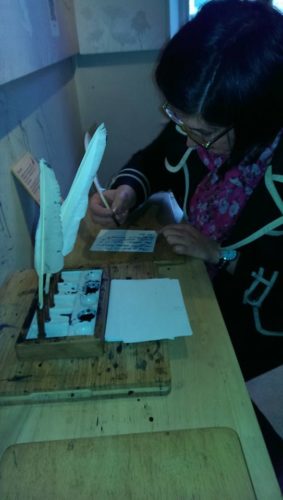 One day, Rebecca Rideal wrote a history book, intended for the general, non-academic reader. You know the type – the sort of person who is interested in history, wants to know about the world they live in and what shaped it, but doesn’t want, isn’t interested in, perhaps hasn’t had the sort of education where they can handle, a dry academic monograph. We should be glad – after all, back in January, we were told that ‘Popular history writing remains a male preserve.’ Good ol’ Rebecca, doing her bit to redress the gender imbalance!

Rideal was interviewed in The Guardian, and The Guardian pulled out some exciting-sounding quotes, because, well, it’s a newspaper, and that’s what they do. Especially now that online newspapers are obsessed with lacing their bylines with as much clickbait as possible. ‘The time of the grand histories is coming to an end,’ Rideal declared. It’s a headline that makes people sit up and take notice, and sit up and take notice, they most certainly did! The Guardian is no doubt raking in much advertising from Rideal’s interview, but unfortunately for Rideal…. well…. Some people on Twitter got upset.((It’ll be a cold day in Hell when I’m able to say 5 minutes have gone past without some people on Twitter not being upset about something, but there we are.))

You see, Rideal is a PhD student. And there are academics who already have PhDs, and who work in History Departments at universities in various places in the country, who were upset/annoyed about her interview.((Using my special research skills, I have identified them, and found the harsh comments they made. But I’ll spare you. It comes across as a bit sad and jealous, in fact. “Why aren’t we in The Guardian? Not that we want to be in The Guardian, oh dear me no.”)) They hadn’t read her book – they probably won’t, because it’s aimed at the general reader – but aired strident views upon Rideal and her work, nonetheless. Because Rideal, it appeared from the way they were talking, wasn’t a real historian.

You see, it’s actually complete and utter twaddle, but this snobbery is terrifying.((One wonders if Rideal’s non-traditional route to a PhD rankled in some quarters as well.)) As you may or may not know, I have myself written a history book for the general reader. Although I’m not sure if I’m allowed to call it a history book, which is why I refer to it as ‘historical non-fiction.’ There. That shouldn’t upset anyone. On more than one occasion, I have been referred to as ‘a historian’ and for a moment, I was rather pleased. That sounds fun. I suppose I must be. After all, I’ve spent vast amounts of my time grappling with primary and secondary sources, squinting at old newspapers, deciphering old handwriting on parchment, considering historical context, all that sort of thing. I’m consulted for my knowledge, even by Auntie Beeb, because I know huge amounts of stuff. I suppose I am a historian. But then I thought… no. No way am I going to refer to myself as a historian. Other people can if they like, and to be honest, I do own rather a lot of tweed, but I won’t call myself a historian as, even before The Adventure of Rebecca Rideal, I knew that there were people who jealousy guard the term.

The sort of people who don’t think that Rebecca Rideal is a real, proper, actual historian would certainly never in a million years think that I was.((This is why I’m not too fussed about writing this. The sort of people who objected to Rideal’s headline wouldn’t give a tinker’s toss about anything I have to say, well, just as long as I don’t call myself a historian….)) I don’t even have a History degree. I do however have a History GCSE and a History A-level. My degree is in English.((I was an MPhil candidate, and planned to go forth into PhDlandia. There was nothing wrong with my research but my supervisor was tearing her hair out because my writing style wasn’t “academic enough.” She said to me, “This would make a great piece for a Sunday supplement, but you need to adopt a dry academic tone.” I tried, it drove me mad, I got a post-grad library qualification instead. Ever since, I’ve planned and plotted to do a part-time Masters in English or History, but it nags at me that I just can’t write in an academic voice. In fact the academic voice infuriates me: all those ‘lacunae’ when you could just say ‘gaps’ and be done with it.)) However, a very important part of my approach to the study of English was historical context.

Rather than call myself a historian, and because I must describe myself somehow, when not calling myself a genealogist (or ‘family historian’ – a term to really annoy the snooty), I tend to say “author of historical fiction and non-fiction.” But even this has its pitfalls. First of all, my fiction is unpublished – but dammit, I write it, so there. And then there’s that word… author.

Back in my English degree days, our Mediaeval literature module was called “Authorising English”, the point being that English was looked down on as a mongrel tongue. It was through literature that the English formed an identity, and developed an authoritative voice. And it was important because of that word – author, authorise, authority….

To call yourself an author, you are claiming authority. Perhaps. We see ‘author’ as a grander term than plain ol’ writer. And I did wonder, am I an author, or am I a writer? Will people think I’m too big for my boots if I swan about in a floaty shawl declaring myself to be an author? ‘Being an author’ isn’t my day-job (few published authors can make a living solely from book sales alone), but seeing as I am actually a card-carrying member of The Society of Authors, then I will call myself an author. Or a writer. It depends how I feel. It depends whether or not I’m wearing a floaty shawl.((And still other problems are on the horizon, perhaps. Will we not be allowed to call ourselves authors unless we have creative writing Masters? How far will this gatekeeping go?))

In the end, I’m not sure it matters what you call yourself. It matters far more what you write. Different books have different audiences. It may sound as if I have no time at all for historical academic monographs – of course they do have their place, but there is really no need for people to look down their noses at history books aimed at the general reader. What’s wrong with something that’s well-written, engaging, well-researched, and accessible? There’s plenty of academics in university History Departments who’ve written popular histories (Malcolm Gaskill’s Witchfinders springs to mind – I wonder why?), so let’s cut Rideal some slack.

Rebecca Rideal’s 1666: Plague, War and Hellfire looks jolly interesting to me, and is published by John Murray, available from all good book outlets.