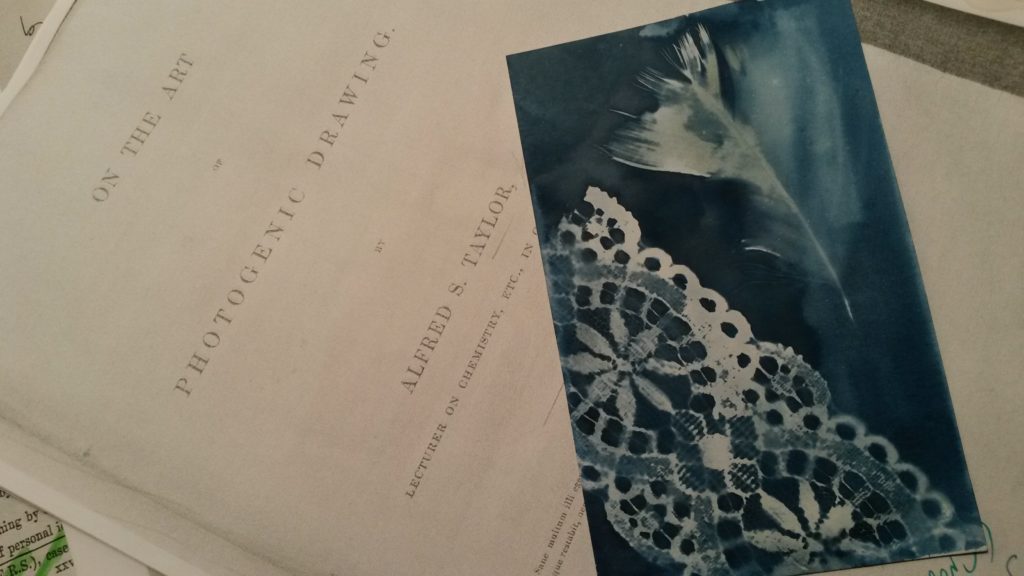 One of the reasons why Alfred Swaine Taylor is an interesting person to write about is that, when he wasn’t rummaging through jars of human innards looking for poison, he had an artistic side and experimented with photography. When Fox Talbot revealed his sciagraphs (‘drawings of shadows’) – which were generally referred to as ‘photogenic drawings’ – at the end of January 1839, Taylor was fascinated and began his own experiments at once. When he couldn’t get Fox Talbot’s recommended silver compound to yield results, he came up with his own characteristic way round it – he used ammonio-nitrate of silver, ‘a compound which has been used for many years as a test for arsenic.'((Alfred Swaine Taylor, On the Art of Photogenic Drawing, London: Jeffrey, 1840, p.6.)) He didn’t patent his process – he seems to have had a low opinion of those who did – and not long afterwards, he enthusiastically embraced what we now recognise as photography, using a camera (or ‘camera obscura’ as they were then known).

Examples of Taylor’s photography survive in two albums which are in private hands,((See articles in the History of Photography journal, by Stephen White (vol 11, July-September 1987, pp.229-35) and Laurence Alt (vol 16, winter 1992, pp.397-8).)) and I have been unable to contact the owners, so I won’t be able to use them in my book. Fox Talbot’s are held at the Science Musuem, but I wondered, given how clear Taylor’s instructions were, whether I could make my own photogenic drawings. The problem was, where would I lay my hands on the ingredients to make my own solution of ammonio-nitrate of silver? And hopefully, without ending up on some sort of alert list?

As luck would have it, an opportunity arose to make a cyanotype. I didn’t realise you could buy kits to make these, but I was able to make one at a workshop. Somewhat ironically, given that Taylor’s photogenic drawings used a compound which was used for identifying the presence of a poison, the cyanotype process actually uses a poison – cyanide. I was very excited to come up close and personal to Lady Cyd. It uses two compounds – ammonium iron(III) citrate and potassium ferricyanide, and was discovered by Sir John Herschel in 1842. So if it seems similar to the photogenic drawing, then it is – same process, different chemical. I think this is as close as I’ll get to the technique Taylor used.

I was in Liverpool this weekend, visiting my old university chum Jen, and the annual River Festival was on. A celebration of culture and watery activities was going on across Liverpool’s iconic waterfront, and the Open Eye Gallery was hosting a “sun photograph” workshop. It was run by Rachel Brewster of Little Vintage Photography, who just so happens to be related to Sir David Brewster. He was a Scottish scientist who took a great interest in Fox Talbot’s work, corresponding with him over the development of calotypes (making photographs on paper, an alternative method to the Daguerrotype); he also invented the kaleidoscope.

Jen and I rummaged about in a box of goodies to find things that would work well as a cyanotype. Taylor’s book recommends feathers (particularly ones with dark and light patches), lace (preferably black, as it’s more opaque than white) and certain leaves, such as the rose. So I picked the feather and the lace, and Jen initially chose a feather concoction, but decided instead to go for a more 80s approach and used a cassette tape. 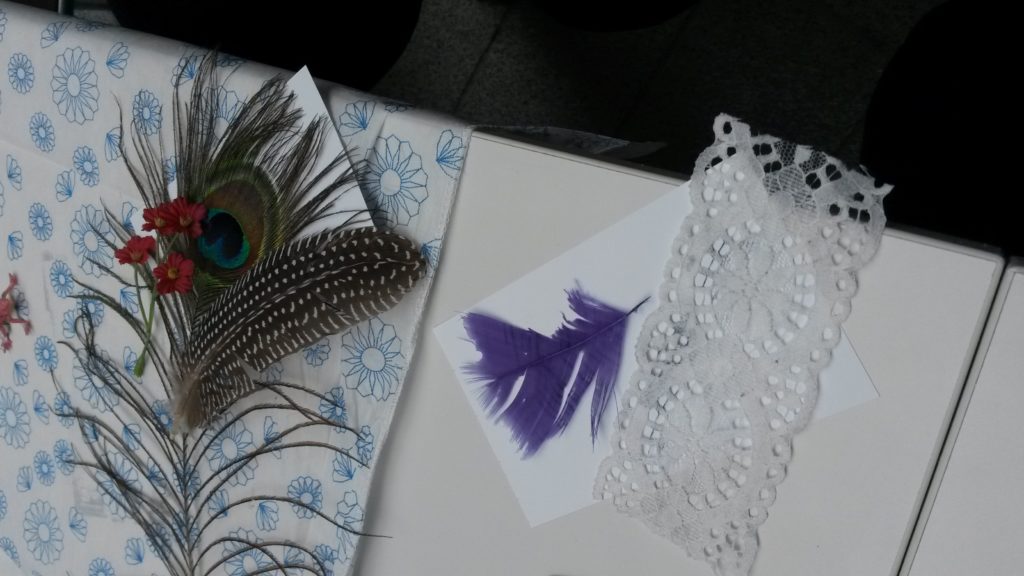 We were gowned up, and wore gloves and goggles (a luxury not available to Herschel, who presumably did his cyanotypes wearing naught but tweed and a shirt with flouncy sleeves), and painted a blank postcard with the green cyanotype solution. Then we laid our objects on it. This is a much faster process than the silver ones used by Fox Talbot and Taylor – they painted the chemical solution on paper, then had to leave it to dry for days in a dark cupboard (one can easily imagine other people in the house accidentally stumbling across these paper-stuffed cupboards and wondering what on Earth was going on!).

Taylor suggested pressing the paper and its objects between two sheets of glass, tightly bound together, so I carefully pressed the lace and feather against the card, as close as I could. If the contact is as close as you can get, it stops stray light coming from the side and spoiling the sharpness of the image. It was then laid in a plastic wallet and the Sun did its thing, before being placed under a UV lamp for a more intense session. The chemicals react to UV light – something the mid-19th century Victorians didn’t know about. Because Taylor’s photogenic drawings got very hot under glass, he wondered if heat alone would make them transform – so he tried making some photogenic drawings in rooms without any light and nothing happened. Sunlight, he realised, was a vital ingredient. 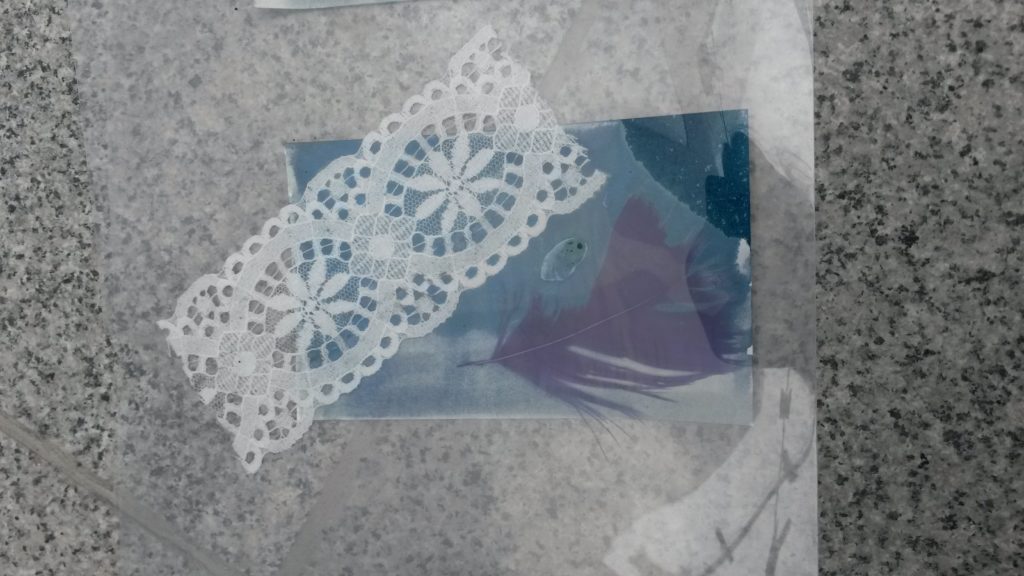 After about half an hour, we took off the objects and hurried the card into the waterbath for a wash. You’ve got to get the chemical off the previously covered areas of card otherwise it will continue to react with the sunlight and your shadow-drawing will disappear. 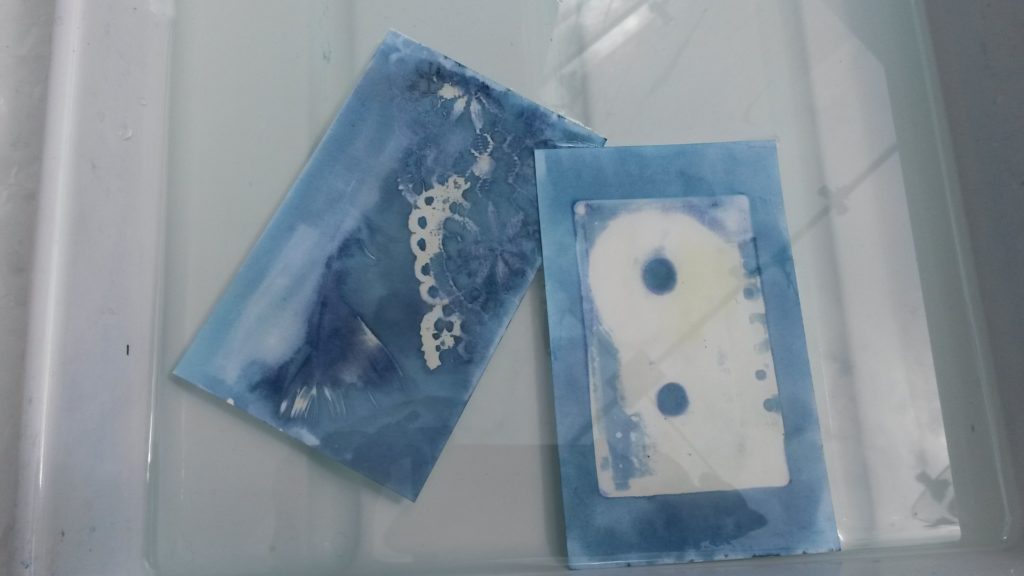 Then they were pegged up to dry. 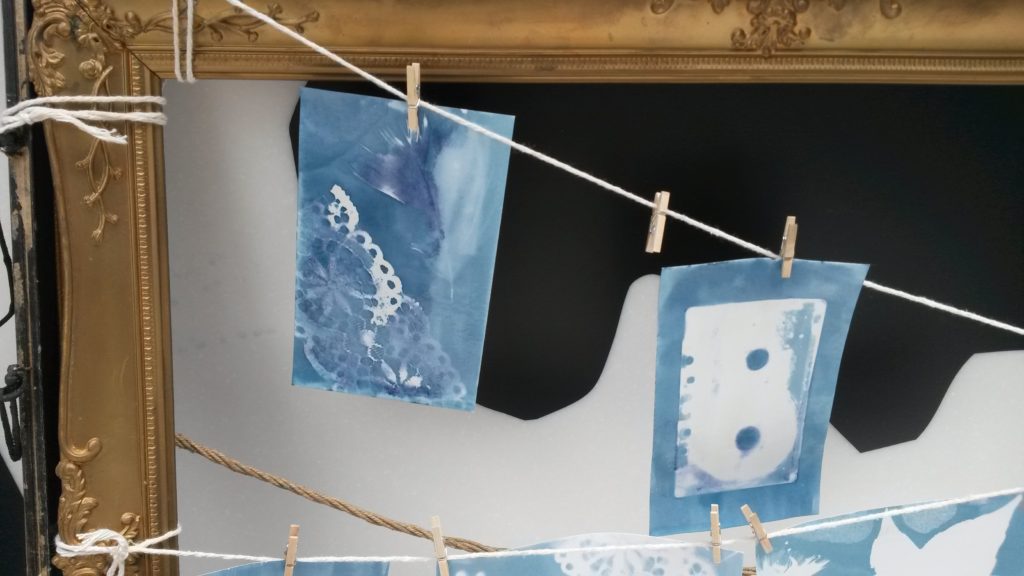 Here’s a close-up of part of the feather. The detail is extraordinary, and even with a camera in my mobile phone, I was enchanted by the power of the cyanotype. I’m so pleased I had the chance to make my own, and come close to the hands-on chemistry that Taylor, a man I’ve been spending a lot of time with in my head lately, did almost every day. Reading his On the Art of Photogenic Drawing pamphlet, Taylor’s excitement at what he’s able to create with the application of his chemical knowledge is palpable. And when I studied each barb of the feather, which reproduced with such detail it almost appears 3D, I wondered what that must have seemed like to someone who before would only have seen images reproduced by an artist’s brush. To be able to capture images via chemicals and sunlight, rather than artistic skill, must have seemed so liberating and exciting; to put chemicals to use for beauty and good, when in other hands, as Taylor well knew, they were used for bad. 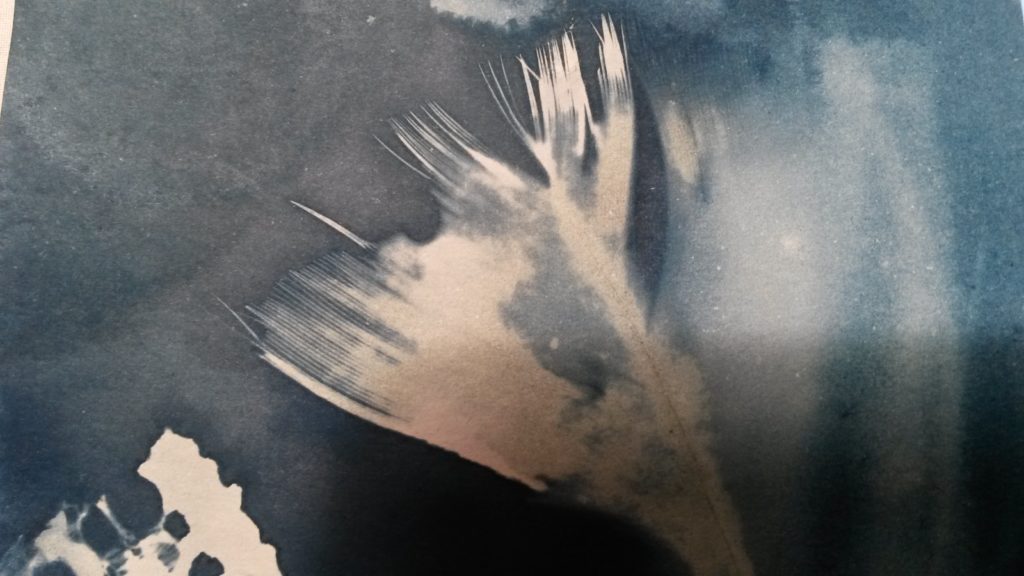 Fatal Evidence: Alfred Swaine Taylor and the Dawn of Forensic Science will be published in 2017 by Pen & Sword.